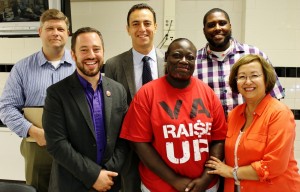 Thank you David, Tonya, Keith, Marcus and Kevin for your leadership and for sharing with us the vital information we need to continue the fight for equality and higher wages. It was very encouraging to hear how we’re changing the conversation around the minimum wage and making progress around the country, which can certainly be translated to victories here in Virginia.

Income Inequality has been called the defining issue of our times. The gap between the wealthiest Americans and the rest of us is at its worst levels in our nation’s history, and threatens to undermine our economy, our community and our democracy. As more and more Americans struggle to make ends meet, we are forced to consider whether the American dream may be a thing of the past.
Yet, over the past two years, we have seen the birth of a movement to fight back against income inequality. Best of all, this movement is winning extraordinary victories. Fast food workers, adjunct professors, child care providers and more are uniting to demand living wages and a voice on the job. Voters in conservative states such as Nebraska, Arkansas and South Dakota have voted to raise the minimum wage. Los Angeles is raising their minimum wage to $15/hour, which will begin to lift 1 million people out of poverty. States and cities across the nation — including Maryland and D.C. — are following suit.
Panelists will explore the impact of income inequality, the victories that are being won, what we can do here in Virginia and what it’s like to live as a low-wage worker.
Panelists include: