The FCDC newsletter was renamed to the Blue View in 2018

FCDC’s newsletter was renamed The Blue View in 2018.

Here are archives of our previous newsletter, The Democrat. We’ve archived the scanned issues going back to 1962! 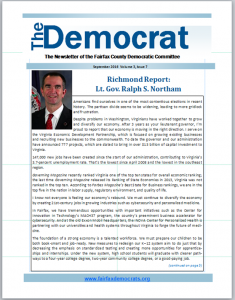 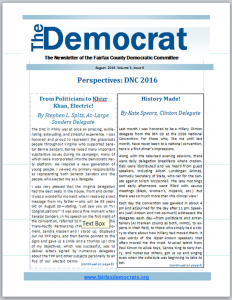 The May 2016 issue of The Democrat  is now available. 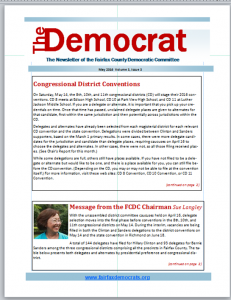 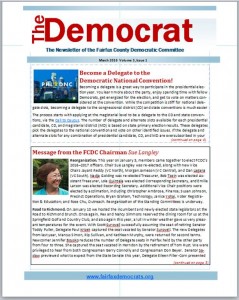 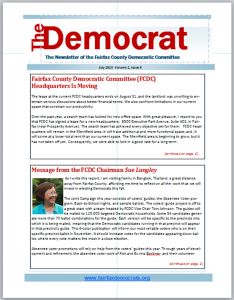 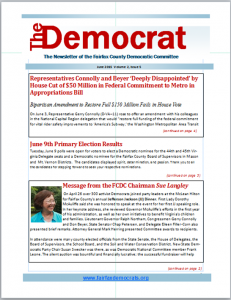 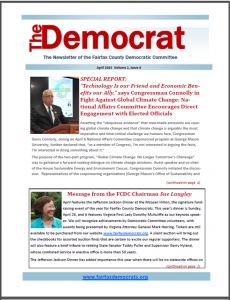 Download and read the December 2014 issue of  The Democrat. 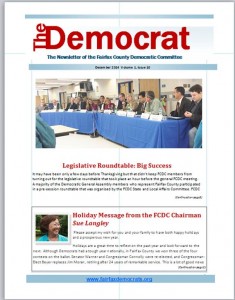 This and more in the November 2014 The Democrat.

Open and read your November 2014 The Democrat  today. 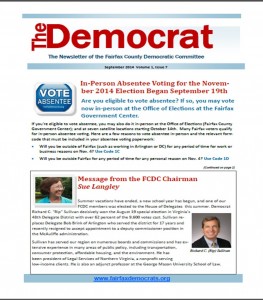 Download and read why our FCDC Labor Committee is addressing, “What labor wants?”  Find out what long-time Watergate-era democratic activist recently died. 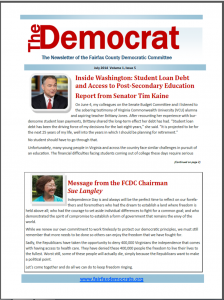 Discover in the July 2014 issue of The Democrat Download and read why Fairfax School Board Member Jane Strauss says the School Board’s vote to increase elementary instruction for students is a good change.  Read and respond to The Democrat’s column – Point/Counterpoint: The Meals Tax.  See why our FCDC Labor Committee is saying  labor is committed to immigrant rights.  Read Part II of the FCDC’s National Affairs Committee’s series of national issues and questions of concern to Democrats. Need to catch up on what the campaigns are doing?  Read about the 2014 Senatorial and Congressional candidates and their campaigns in the Campaign Trail Report. This and more in the July 2014 The Democrat. Open and read your July 2014 The Democrat today. Discover in  Your June 2014 Issue of The Democrat 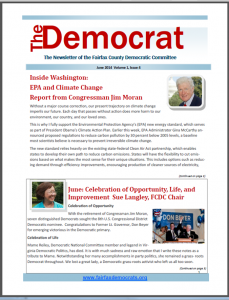 Download and read Delegate Marcus Simon’s first article to The Democrat. Find out why Pat Hynes wants to talk about big “D” Democratic values and how they inform policy around public schools. See why our FCDC Labor Committee is promoting school and union partnerships. Follow the FCDC National Affairs Committee’s series of national issues and questions of concern to Democrats. This and more in the June issue of The Democrat. Open and read Your June 2014 Issue of The Democrat  today.   Special JJ Edition of The Democrat  Take a moment to browse through the Special JJ Edition of The Democrat  and see who was awarded the FCDC District Member of the Year, FCDC Volunteer of the Year, Magisterial District of the Year, Charles S. Robb Young Leaders Award, and Lynda J. Robb Community Service Award; read who received magisterial district awards; hear about the successful silent auction; and, enjoy the memories of the 2014 Jefferson-Jackson Dinner.     Read about the program and the dinner festivities in the Special JJ Edition of The Democrat. May 13 2014 The Democrat Revised Edition Open and read the May 2014 issue of The Democrat today and discover Find out why the Labor Committee says “Elected leaders play an important role in whether workers have the right to freely organize into a union;” read about who you should be congratulating this month and whose lives should be remembered in our “People in the News” section. Discover and participate in the two new additions to The Democrat: The Book of the Month contributed this month by the National Affairs Committee and The Democrat Monthly Trivia Contest; this month’s contest theme is “30 years ago.”  Do you remember where you were in 1984? This and more can be found in the May 13 2014 The Democrat Revised Edition The Democrat Monthly Trivia Contest Frequently Asked Questions (FAQs)

April 2014 Democrat The second issue of the redesigned The Democrat is now available. The April 2014 issue will capture your interest with Read National Affairs Guest Author, Lori Wallach’s article on the NAFTA expansion agreement, Trans-Pacific Partnership (TPP); find out why the Labor Committee says “to restore our middle class, workers must be free to organize and participate in unions without fear of retaliation;” discover who should receive our congratulations in our “People in the News” section, and hear about what the FCDC Technology Committee has been very busy doing. This and more can be found in the April 2014 issue of The Democrat.

March 2014 The Democrat Take a moment and review the redesigned monthly publication, The Democrat. The March 2014 issue will capture your interest with Learn about how the Governor is keeping his campaign promise of “Putting Jobs First.” Find out more about the topic of the program of our next FCDC Meeting from the National Affairs Committee, shed a tear when reading our human interest story, Remembering Shirley Carson, and review the volunteer opportunities and Headquarters News. This and more can be found in the March 2014 issue of The Democrat. 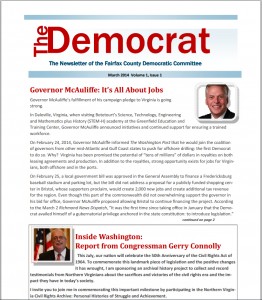 Archiving in process – Click here to view the files We are scanning past print issues of The Democrat to make them available to the public.

How to Submit Material Generally material submitted to The Democrat should be limited to 250-300 words unless exceptions are made by the Editor or FCDC Chair. Please email material to thedemocrat@fairfaxdemocrats.org. Attach text file or photos, or copy the material into the email message. Deadline for submission is the last day  of each month by 11:59 pm for inclusion in the following month’s issue.  Limited numbers of The Democrat are mailed, primarily to those who do not have access to email. Deadlines Articles must be received by usually the last Friday of each month unless the month has four weeks. Deadlines are published in The Democrat. Articles received after the deadline may not make it into the issue. Advertising Ads are very much welcomed and accepted; however, we reserve the right to reject ads for any reason. No product, service, or event advertised herein is endorsed by The Democrat or the FCDC, unless otherwise noted. Let Us Hear From You! Write articles! Send photos! See details above, under How to submit material