WILLIE HUDGINS TO BE MEMORIALIZED APRIL 25 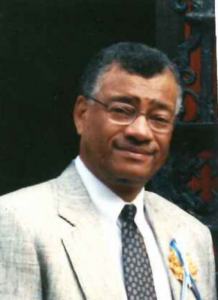 WILLIE L. HUDGINS JR.
(Family photo)
Willie Hudgins, a Reston resident with his beloved wife Cathy, Hunter Mill Supervisor, was an accomplished lawyer and Reston resident since 1969. He suffered a tragic fall at his gym while exercising on March 27, and succumbed to his injuries at INOVA Fairfax Hospital on April 11.
Mr. Hudgins, 72, was a Howard University graduate who went on to a distinguished 39-year law career in the Antitrust Division of the Department of Justice. Recognized as a leading minority litigator, he later joined the law firm of Kelley Drye as a partner before retiring in 2007.
Like his wife, Mr. Hudgins was dedicated to his Reston community. Known by some friends as the Prince of Reston, he served as Chairman of the Reston Community Center Board of Governors and volunteered with the South Lakes High School tutoring program. He also served as Commissioner of Reston Soccer and ushered at his church.
Along with Cathy, his wife of 48 years, he is survived by sons Tony and Michael.
A public memorial service will be held on Saturday, April 25 at 1:00 pm at St. Thomas a Becket Catholic Church, 1421 Wiehle Avenue, Reston. The family asks that in lieu of flowers, contributions in Mr. Hudgins‘ memory be made to Brain Injury Services [http://www.braininjurysvcs.org], Initiative to Prevent and End Homelessness [http://www.fairfaxcounty.gov/homeless], or So Others Might Eat [http://www.some.org].