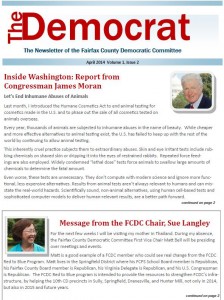 The second issue of the redesigned The Democrat is now available. The April 2014 issue will capture your interest with

Read National Affairs Guest Author, Lori Wallach’s article on the NAFTA expansion agreement, Trans-Pacific Partnership (TPP); find out why the Labor Committee says “to restore our middle class, workers must be free to organize and participate in unions without fear of retaliation;” discover who should receive our congratulations in our “People in the News” section, and hear about what the FCDC Technology Committee has been very busy doing.
This and more can be found in the April 2014 issue of The Democrat.